Carl Walters was known for both wheel-thrown pottery and for modernist hand-built ceramic human and animal sculptures.

From 1919-1921 Walters worked to recreate the turquoise glaze seen during a 1919 visit to the Metropolitan Museum of Art. He developed “’Walter’s Blue’ a translucent blue glaze closely related to that seen in ancient Persian ceramics.”[1] Arnold Blanch introduced Walters to the Maverick Art Colony, which Walters joined in 1922. It was in this artists’ community in Woodstock, NY where Walters had his first kiln and studio.

Although predominantly hand-built, some molds were used to create the animal sculptures. The animals and human figures are sometimes placed in dioramas assembled and presented in slab-built boxes. “Walters was one of the first American sculptors to exhibit finished pieces in clay.”[2] “Walters had his first show as a ceramist at the Whitney Studio Club in 1924. … the Whitney Studio Club became the Whitney Museum of American Art ….”[3]He shared the general spirit of American work in this medium but his main sources were ancient Egypt, Persia, and China. By turning to the masters of this art in the distant past, he recaptured the dignity of the medium—and in so doing restored glazed pottery as a sculptural material.[4]

Early in his career, Walters was known as a painter.  He studied at the William Merritt Chase School in New York City with Robert Henri. 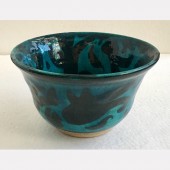 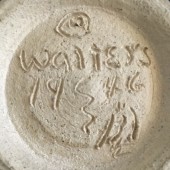 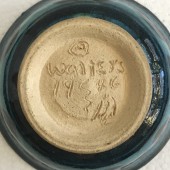