Eileen Reynolds and her husband Rossi Reynolds worked with earthenware and stoneware which they glazed with blue and white underglaze with a clear over glaze.

Reynolds set up her first studio in 1943 where she worked for the next five years with her husband Rossi Reynolds.

She had a design relationship with Heath Ceramics before Heath established its iconic cast dinnerware.

After the death of Rossi Reynolds, Eileen married Ross Curtis and over the years they began to work together in a studio they established in Sausalito, California. Most of the Eileen and Ross Curtis forms which were wheel thrown by Eileen and decorated by Ross show the influence of Greek and Persian pottery.

Both Eileen and Rossi Reynolds put a lot of information on their pots. This was scribed into the foot and included clay and glaze codes. The studio seal, two backed R’s, designed by Wilder Bentley, was added in the late 40’s. After the death of Rossi and the development of more stoneware most of the information was deleted except the seal and the initial of the artist, “E”. 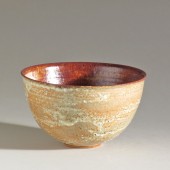 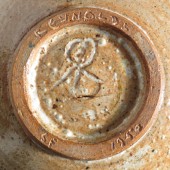 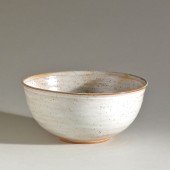 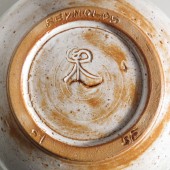