With the primary concern of discovering sculptural possibilities through the making process: Reintjes’ functional work often takes the form of a polygon. Surface treatments reference processes from science and nature, exploring abstractions in color, shape and pattern. Reintjes uses surface glazes to complement the vessel. These surface patterns are also intended to be seen independent of the object as compositions of color, shapes.

Spatial groupings take the form of wall murals or bas relief  installations. Through this work, Reintjes is strictly motivated by offering a visual experience through shape, space and pattern. Each spatial grouping is brought together by a series of objects, often relating to her vessel work in terms of surface design. From biomorphic organization to geometric and grid-like arrangements, Reintjes’ wall objects and installations are determined by the interplay of repeated forms.

The Marks Project is not aware of any signatures or marks for this artist.
Column Vase
Materials: Porcelain
Method: Cast
Surface Technique: Glaze 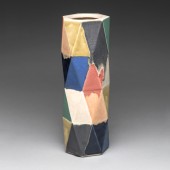 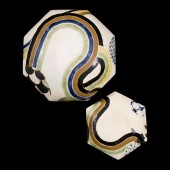 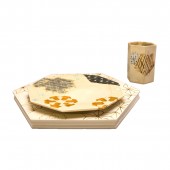 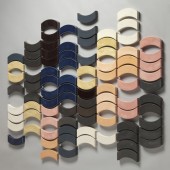 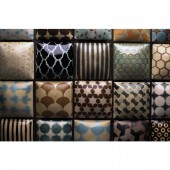 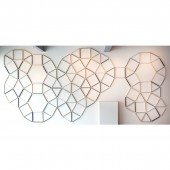