Vernon Owens is known for a wide range of functional pieces referencing the southeastern pottery tradition both in form and glaze color. His work was created at Jugtown Pottery.

Jugtown Pottery in Seagrove, Moore County, North Carolina is in the center of the North Carolina pottery tradition. It was founded in 1917 by Jacques and Juliana Busbee. The Busbees were artists originally from Raleigh, North Carolina. The couple set about creating opportunities for potters to preserve traditional regional skills. It was the traditional orange glazed, salt fired wares of the region that had attracted the Busbees to Seagrove.

In an effort to market the local potter’s work to a larger audience Julianna opened the Village Store in 1918 in New York City. Since the workshop at Jugtown had not yet been built orders for the store went to potters who had their own wheels and kilns. They used locally dug clay that was mixed using mule power. The thrown pieces were fired in wood burning kilns. Henry Chrisco, Rufus Owen, James Owen and J.W. Teague were among the first group.

The first known potter to work with the Busbee's at Jugtown was James H. Owen. Charlie Teague was the second known potter to be hired by the Busbees. Ben Owen was hired as the third known potter for Jugtown Pottery in 1923. The earliest work produced at Jugtown was white or brown slip decorated and was for domestic use. Tiffany in New York was contacted as a possible outlet for work. This connection led to the addition of new shapes, many showing Asian influences as well as a group of new glazes.

John Mare purchased Jugtown in 1960 and hired Vernon Owens to throw pots for Jugtown. Vernon’s brother, Bobby Owens, along with Charles Moore glazed the ware, loaded and fired the kiln. The Owens brothers are the sons of M.L. Owens, who added the s to his surname and the grandsons of James H. Owen. After Mare died suddenly in 1962 Vernon Owens leased the pottery and ran it until 1968 when it was purchased by Country Roads, Inc. a nonprofit corporation dedicated to preserving traditional handcrafts.

Vernon continued to work at Jugtown with Nancy Sweezy, a potter, who became the director soon after Country Roads purchased the pottery. She changed the earthenware glazes to fritted lead glazes and began the use of upright oil kilns. She developed a completely different line of colors. In an effort to create lead free functional ware Sweezy developed a new line of higher temperature glazes in the early seventies. An apprenticeship study program set up by Sweezy, brought over thirty pottery students to study at Jugtown from 1969 through 1980. Pam Lorette, now Vernon’s wife came in the late 1970's to study at Jugtown.

In 1983 Country Roads, Inc. sold the pottery to Vernon who continues to make pots, something he has done since he was seven. Together with his wife Pam, son Travis and daughter Bayle, the family continues the traditions of Jugtown while adding new forms and glazes with an eye to the 21st century. The work is fired in a modified groundhog wood burning kiln built in 1996, often with the addition of salt.

The way pots are marked: 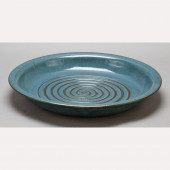 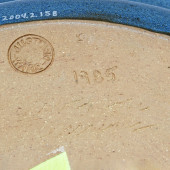 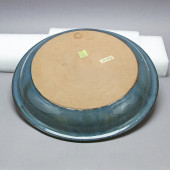 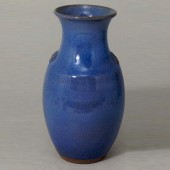 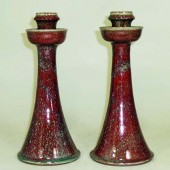 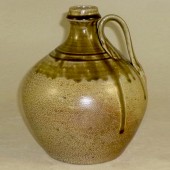 Photo: Jugtown
Made by Vernon Owens 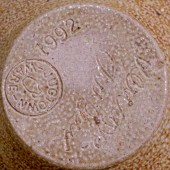 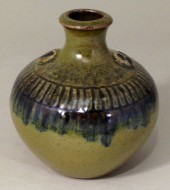 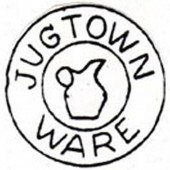 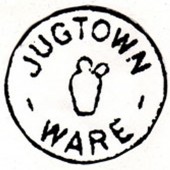 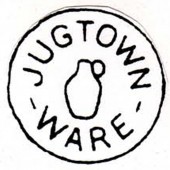