Daniel Rhodes, a mentor to Negoro until his death in 1989 emphasized the importance of technique, skill at the wheel and aesthetics attitudes to work. In addition to her studio work Negoro was a very active teacher who incorporated these fundamental concepts into her teaching. She credited Bernard Leach with making her feel it was OK to be Japanese. In 1965 she was brought to the University of Connecticut where she established a ceramics program in the School of Fine Arts.

Negoro’s work was shown at the Museum of Modern Art in New York, the Smithsonian Institution, Washington, DC, the DeCordova Museum in Lincoln, MA, the Lyman Allyn Art Museum in New London, CT. In 1992, the Benton Museum, University of Connecticut, Stores, CT held a retrospective of her work. 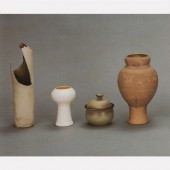