In the early 1960’s Kajitani saw an exhibition of American ceramic artists in Tokyo. He was impressed by the work of Richard Shaw and Marilyn Levine. When Kajitani first immigrated to the USA he studied with Larry Elsner at Utah State. Kajitani took inspiration from the Southwestern desert which impacted his work throughout his career.

Kajitani, Ban. “The Use of Clay Forms to Symbolize the Quality of the Southern Utah Landscape.”  Graduate Thesis: Utah State University, 1976.

“Kajitani” handwritten, in slip (not incised). 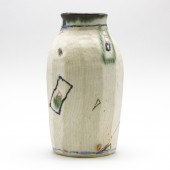 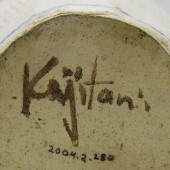 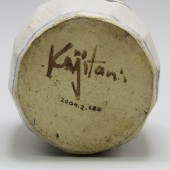