Dick Hay is known for stoneware and terracotta sculpture with elements consisting of an exaggerated vessel form element mounted on a unique neutral toned and carved base. Decorative techniques include: application of bright high gloss colors, textures, shallow carving, etc. Hay made some works in series such as the “Object Series.” In these series functional clay forms are combined, manipulated, and surfaced with gold luster to create wall plaques. Early in his career, Hay also made a series of sculptural, torso busts.

Hay entered Ohio University to become a high school teacher. He took a class in ceramics with Professor Henry Lin, a master potter. It is Professor Lin who Hay credits with igniting his lifelong passion for ceramics.

Hay had a distinguished teaching career at Indiana State University and received University honors and awards during this time including: five University of the Arts Endowment Grants; and the Caleb Mills Award for Distinguished Teaching. He also received the Excellence in Teaching Award from the National Council on Education for the Ceramic Arts (NCECA). Hay served as president of NCECA (1978-80).

“Dick Hay” in cursive, in slip, not inscribed 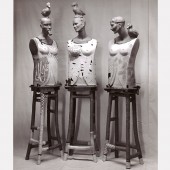 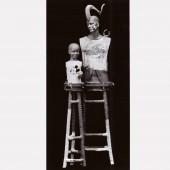