Kerry Chaplin and her husband, John Natale, had studios in the 1970s and 1980s in Cross Plains, Wisconsin and later at their farm near Arena, Wisconsin. Kerry also sold her raku vessels and wall pieces at numerous art fairs and galleries in Wisconsin and around the United States.  Kerry was a member of the Wisconsin ceramic community. She died in an automobile accident at age thirty-four. 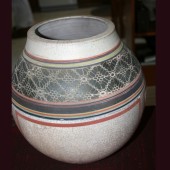 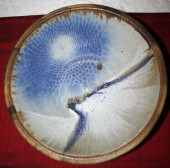