Sascha Brastoff was a ceramist known for designing and producing a wide range of porcelain functional and sculptural ceramic forms. From 1947 to 1962 Brastoff developed an atelier of artists to produce his designs of intricately hand decorated tableware and home decor items. Sgraffito and gold lusters were among the numerous decorative techniques used. Multiple firings were often needed to produce each item.

In 1947 Winthrop P. Rockefeller backed Brastoff in his first California atelier focused on the design and production of high-quality porcelain dinnerware and decorative ceramics. Brastoff had 3 business locations in the Los Angeles area. The first was in a small Quonset hut in West Los Angeles and the last was a state-of-the-art studio/factory which opened in 1953. At its height, Brastoff’s designs were produced by up to 100 staff artists, production assistants, and administrative personnel. In 1962 Brastoff returned to the life of a solo studio artist concentrating on enamelwork, oil painting, and drawing. By 1984, poor health caused Brastoff to cease working.

After Brastoff’s return to his solo-studio practice in 1962, the factory was moved to Hawthorne, California where it was active from 1963-1973.

Note: In addition to the ceramics career outlined above, Brastoff had trained as a ballet dancer and was an actor, metal sculptor, and jeweler.

Sascha Brastoff's earliest sketches and ceramics are signed "Sascha". In 1947 (while working solo) he started to sign his name "Sascha B.” This signature went on to be signed by staff members. As a general rule, anything signed “Sascha B.” is most likely signed by a staffer. All original design pieces are signed “Sascha Brastoff”. In late 1953, Brastoff added a back stamp to the underside of each piece. This is a rooster under which is seen a stylized cursive or script "Sascha Brastoff" and below that in all caps the block letter denotation, CALIFORNIA U.S.A. ©. Items produced after Brastoff left the factory in 1962, are signed with ® indicating registered trademark. 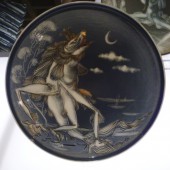 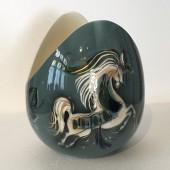 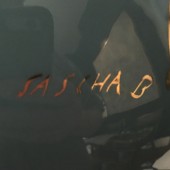 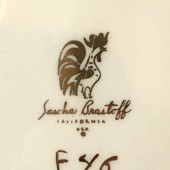 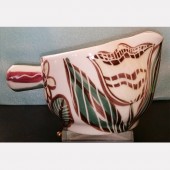 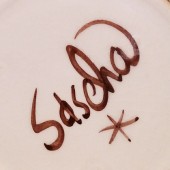 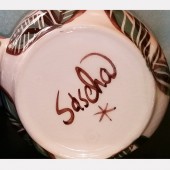 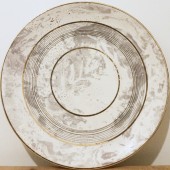 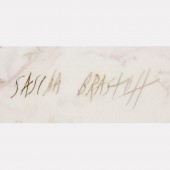 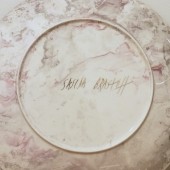